The 13th to Screen in the Library March 10th 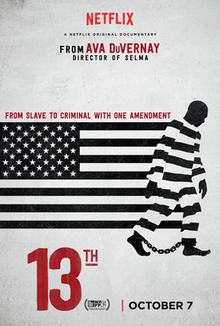 Don’t miss the screening of the Oscar nominated documentary, 13th, on Friday March 10th from 6:30 to 9:00 pm.  From director Ava DuVernay (Selma), the 13th explores the history of the relationship between race, justice, and mass incarceration in the United States. Watch the trailer

The film’s title  refers to the 13th Amendment which outlawed slavery, but left open the possibility of slavery as a punishment for a crime.  DuVernay’s film takes us from the convict leasing of poor freedmen after the Civil War, to the era of Jim Crow and lynchings, to the war on drugs that disproportionately punished blacks, to the present day of the prison industrial complex with prisons again disproportionately filled with African-Americans.

Admission is free and hot beverages and discussion opportunities are included.

Released on October 7th by NetFlix it has been awarded the Critics’ Choice Documentary Award Best Political Documentary, More

Here’s what the reviewers have had to say about this film:

Powerful, infuriating and at times overwhelming, Ava DuVernay’s documentary 13TH will get your blood boiling and tear ducts leaking. Full review
Manohla Dargis
The NYTimes
In this fierce call to action, director Ava DuVernay effectively doubles down on both educating her viewers and inspiring them to take a stand against racial injustice in 2016 America. Full review
Renee Schonfeld
Common Sense Media
Nothing less than an abbreviated history of racial inequality in America, with the prison system as the vortex at its center. Full review
A.A. Dowd
A.V. Club
When you watch “13TH,” you feel that you’re seeing an essential dimension of America with new vision. That’s what a cathartically clear-eyed work of documentary art can do. Full review
Owen Gleiberman
Variety