Banned Books Week is an annual event that celebrates the freedom to read.  This year it runs from September 30th to October 6th. Librarians, teachers, booksellers, publishers, journalists, and readers of all stripes band together to support the right to read and to express ideas freely.  Although the first amendment  guarantees our right to free expression, some groups continue to try to restrict access or ban outright certain materials.  To get some idea about what has been banned in schools and libraries watch a host of Virtual Read Outs on YouTube, take a look at the American Libraries list of Banned and Challenged Classics and Wickipedia’s list of books challenged during the 1990s, or just come to the library to see banned books on display.  To understand some of the implications of censorship turn to Bill Moyer’s new video essay or watch independent bookstore chain, Bookmans’, YouTube effort. 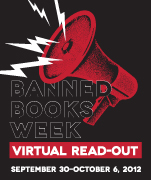