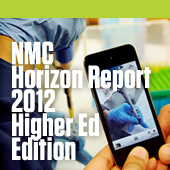 This month the Chat Chow team presented the New Media Consortium’s 2012 Horizon Report highlighting the six emerging technologies that are likely to enter mainstream use in the next five years–two that will emerge in the near term horizon (1 year or less), two that are likely to be in use in the mid term (2-3 years), and two that we can expect to see in  the far term (4-5 years). Not unexpectedly, mobile apps and tablet computing made the list for the short term technologies. On the mid term horizon the consortium saw game-based learning and learning analytics. Gesture-based computing and the Internet of Things were selected as emergent in the far term.

The team also mentioned some of the technologies that made the consortium’s short list including cloud computing, social reading, augmented reality, digital identity, and haptic interfaces.