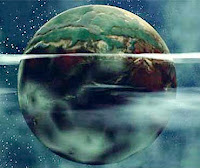 In this session  Dean of Education, Dr. Scott Sorvaag, aided by several of his former students, described how they created and sustained not just a paperless classroom, but also a real community of learners. Since the class was Global Issues and Sorvaag’s focus was sustainability and community, the paperless component was part of an overall theme and not just an attempt to employ new technologies. Students were given a choice, and all of them chose to go paperless.  Some of the tools employed included a free, cloud-based collaboration program called Typewith.Me; the audience response system, Poll Everywhere; the free zooming presentation editor, Prezi; smart phones; and Sorvaag’s syllabus which was loaded with links. Students kept up with their work through discussions in the blogs and wikis they created in Typewith.Me. Rather than taking notes in class, the group spent the last 10 minutes of every session recouping what they had learned and putting it into the class wiki. When they watched videos, the students were encouraged to contribute their reactions into the Poll Everywhere program.  Prezi was used for student presentations.  Listening to the Sorvaag and his enthusiastic students it was clear that not only had they learned some new technologies, but that they had also learned a good deal about how to create community and promote global sustainability as they moved toward future careers.

Missed the session?  See it here on Tegrity.